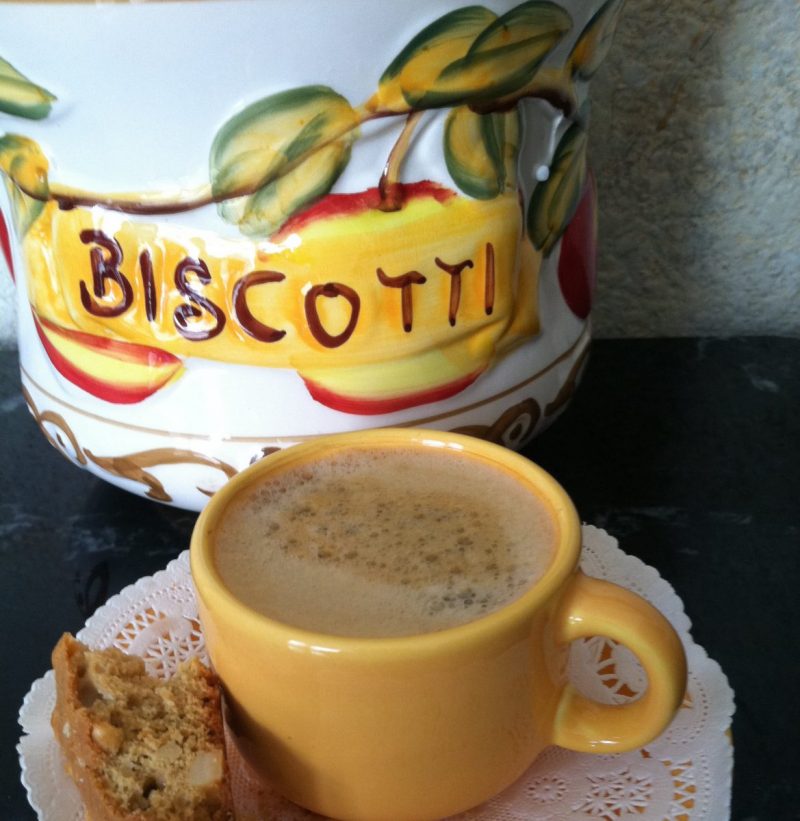 Italians LOVE their biscotti! We eat them for breakfast, for a mid-day snack with a cappuccino (my personal favorite) or dunked into the local Vin Santo, a sweet dessert wine.

Biscotti, pronounced “bee SKOAT tee” is plural for biscotto, which literally means twice (bis) cooked (cotto). This technique was used to produce a long-lasting biscuit by drawing out as much moisture as possible.

Used by the Roman Legions, saying biscotti have been around for a long time is an understatement. But they seemed to have disappeared after the fall of the Roman Empire. Not until the Italian Renaissance did the biscotti re-emerge. A Tuscan baker from the city of Prato was credited for creating Cantucci di Prato, and to this day an almond biscotti in Tuscany is called cantucci.

Because it was unlikely the biscuits would mold or go bad they were also a perfect provision for sailors who were at sea for long periods of time. It is believed that for both Marco Polo and Christopher Columbus, biscotti were valued staples on their long voyages.

I wonder if that’s why when I travel I always pack a small container of my own precious biscotti to dunk in my cappuccino? Sorry Starbucks, there’s just no comparison to home made!

Makes approximately 3 dozen (depending on how you slice them). 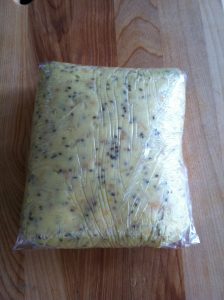 Cream butter and sugar, add eggs one at a time, beating well after each addition.
Add Marsala , mix well.
Stir flour, salt and baking powder together. Stir into butter mixture.
Medium chop cooled almonds, not too course and not too fine.
Stir nuts and anise seed into dough.
Cover and refrigerate for an hour.
I take the batter out of the bowl and wrap in plastic wrap. It takes less space in the refrigerator and is easier to form into the logs. When I remove the plastic, I cut the dough in half length wise and then into half again creating 4 strips of dough. Either way works. 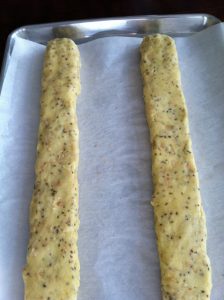 On parchment-lined cookie sheet, take half the dough and shape into 2 logs (12in x 2in). Flatten out slightly. Repeat with the other half of dough.

Bake in 350* oven on the middle rack for 20 minutes or until lightly golden. 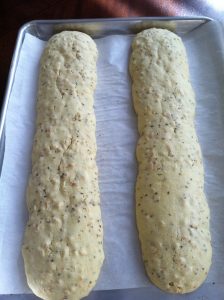 Remove from oven and let cool on cookie sheet. 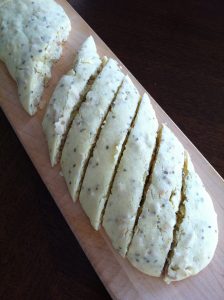 Carefully place log on cutting board and using a serrated knife, cut diagonally into 1/2 inch slices. 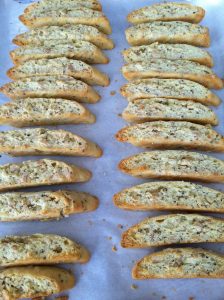 Arrange close together back on cookie sheet, bake for an additional 20 minutes until barely golden. 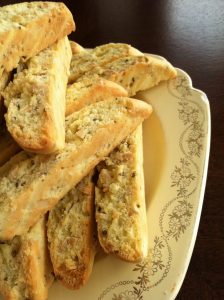 Finally! Your biscotti are now ready to enjoy. If you like them very crisp leave out overnight. (A word of caution: leaving them in plain sight will result in fewer biscotti in the morning). Stored in an air tight container they will keep for several weeks. 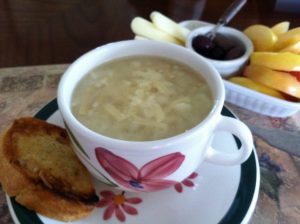 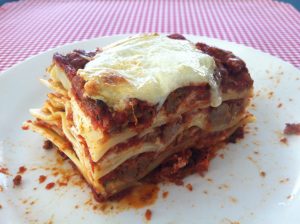