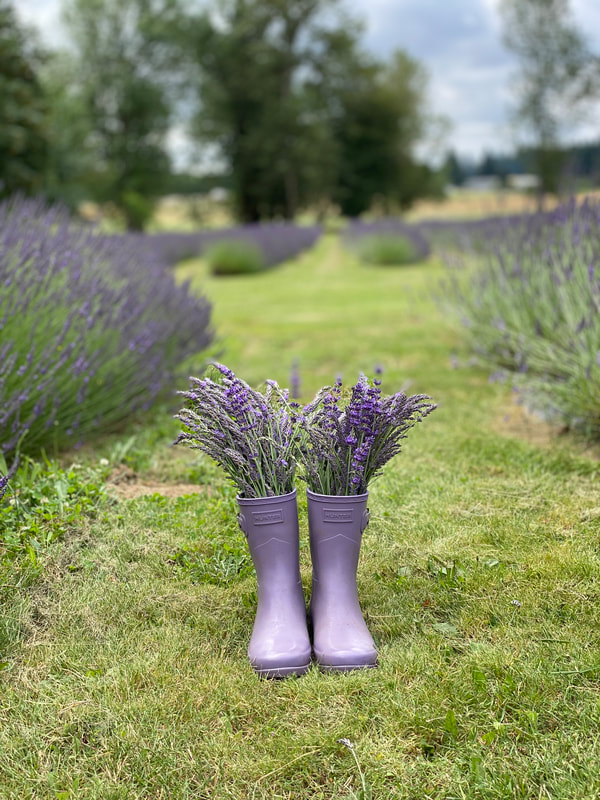 From the field to the kitchen – Can you really cook with Lavender? Yes, however, many have never tasted it and only know that it looks pretty and smells nice. Lavender is best known for its essential oils with an intense yet soothing floral fragrance. It is used in all sorts of things, from beauty products and candles to cleaning supplies (it is my scent of choice in hand soap, dish and laundry soap and sachets for the dresser drawers). They are also frequently used in wellness-related spaces such as luxurious day spas and yoga studios.

Be that as it may, this versatile plant has a range of surprising culinary uses that can be implemented in both sweet and savory dishes. Lavender flowers are most commonly used in dessert recipes, but as you progress in cooking with lavender, you will discover it is also a lovely addition to savory dishes. Like rosemary, lavender can add a robust flavor to roasted meats and is especially good with lamb. In France, it is used in combination with other Mediterranean herbs in a savory blend called Herbs de Provence.

Before we go any further, it is important that you realize that although there are hundreds of varieties of this fragrant herb, not all are suited for cooking. Some lavenders, such as, Spanish lavender, are ornamental plants only and are not edible. Most lavandin, or so-called “French” lavenders are mostly grown for the cosmetics industry and their high essential oil yield, not for their culinary properties. They are actually quite bitter. There is one French lavender, called Provence that is sweet and mild enough for cooking.

The other good culinary lavenders are the “English” lavenders (lavandula angustifolius), also known as true, or common lavenders. These lavenders typically have a complex spicy, citrusy, piney character that boosts the flavor of sweet and savory dishes. A few of the English culinary varieties I have personally seen in the fields are, Royal Velvet and Folgate (both have purple flowers) and Melissa and Edelweiss (Both have white flowers).

Much of the culinary lavender available is imported. As I have recently discovered, there are many small family-run lavender farms locally and across North America. If you are able, a visit to a lavender farm is a special treat for the entire family, especially during the blooming season. The beauty and fragrance alone are pleasantly intoxicating!  And because lavender thrives with limited water and without pesticides, you will be supporting sustainable, environmentally friendly, family farming and agritourism.

A most appealing and easy way to cook with lavender is to create a lavender sugar.  Once you have this in your pantry, you can experiment with adding this flavored sugar to your baking of cakes, scones, biscotti and so much more.

Another method of introducing the flavor is to steep lavender flowers in warm milk, cream or sugar syrups. Consider using these infused liquids and sugar to flavor whipping cream, homemade gelato, jam, fruit syrups, iced tea, granitas, and chocolate truffles (all of which, I intend to make and will post soon).

Also, infusing melted butter and oil yields the fullest, most complex lavender flavor because fats most efficiently pick up and deliver the herb’s key fat-soluble aroma molecules to the smell receptors in the nose.

Crushing, grinding or mashing fresh or dried lavender buds into dry ingredients, such as, sugar, flour and salt using a food processor, or a mortar and pestle is another infusion method. The grinding action forces some of the essential oil and other flavor elements from the lavender into the dry ingredient.

Lavender has a symbiotic relationship with other ingredients. For instance, you will add even more zeal to recipes with lemon by adding the mystery of lavender … everything from lemonade and pound cake to lemon chicken. Honey is another wonderful companion to lavender. Warm honey gently with lavender in a tea ball or cheesecloth bag to infuse a subtle and intriguing flavor into the honey.

As lovely as lavender is, this herb can “overdose” a recipe unless used sparingly. When beginning to experiment in cooking with lavender you should use it as a background flavor … like vanilla; you know it is there, but it is not the main character. It’s important to note that the potency of the flowers increases with drying. In cooking, the rule of thumb is to use 1/3 the quantity of dried flowers to fresh. So, if a recipe calls for 3 teaspoon fresh lavender, you will use 1 teaspoon of dried. That being said, I use only culinary dry lavender in the recipes on this site. 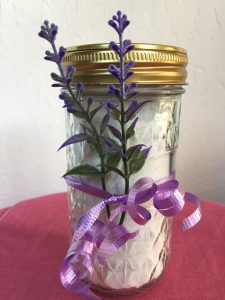 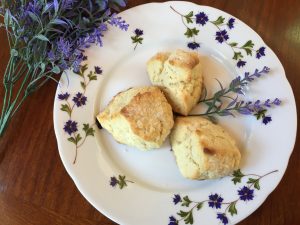