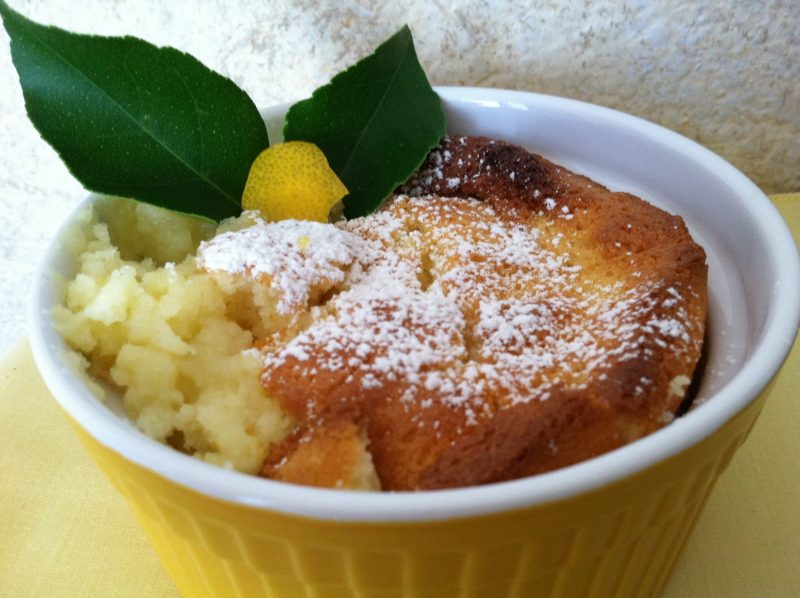 Souffle’s may be sweet or savory, simple or complicated. I rarely do anything complicated any more so this lemon souffle is simply delicious.

The word souffle is taken from the French verb souffler which means to puff up. The puffing up is caused by the beaten egg whites creating steam that is trapped inside (using a round baking dish facilitates the rising).

Conversely, once out of the oven the dessert has a tendency to collapse when exposed to the open air. The trick in keeping them inflated is not to mix the other ingredients in too quickly (which would deflate the trapped air).

Years ago, I was told to put a dash of salt in the egg whites to insure a successful souffle. I really don’t know why this works … but it does.

Place a 9-by-13-inch baking pan in the oven (middle rack). Preheat to 350*.
In a medium bowl, beat (with an electric mixer) the butter and sugar until light and fluffy, add lemon zest.
Separate the eggs and add one yolk at a time, beating well after each addition.
Add half of the lemon juice, half of the flour and half of the sour cream, beat until smooth.
Repeat with the remaining lemon juice, flour and sour cream. 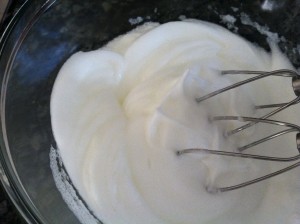 In a separate bowl, beat the egg whites (make sure the beaters are clean), until frothy. Add the salt and beat until you see stiff peaks form when you raise the beaters.
With a rubber spatula, fold in a third of the whites to the lemon mixture. Continue to add the remaining egg whites, gently folding each addition. (Don’t over mix).

Butter a 1-quart souffle dish, spoon in the batter.
Boil enough water (I use a large glass measuring bowl with a spout for easing pouring) in the microwave to fill the baking pan with 1-inch of water. 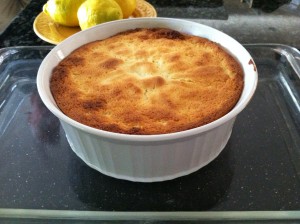 Set the souffle dish inside the baking pan and carefully pour the water in the baking pan. (Don’t get any in the souffle dish). This creates a water bath that will cook the souffle. Bake for 55-60 minutes. It will be golden brown when it is done.
Cool 5 minutes or so, then sprinkle with confectioner’s sugar and serve. 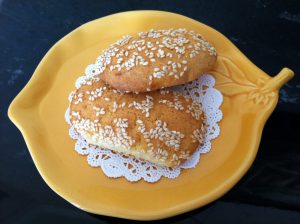