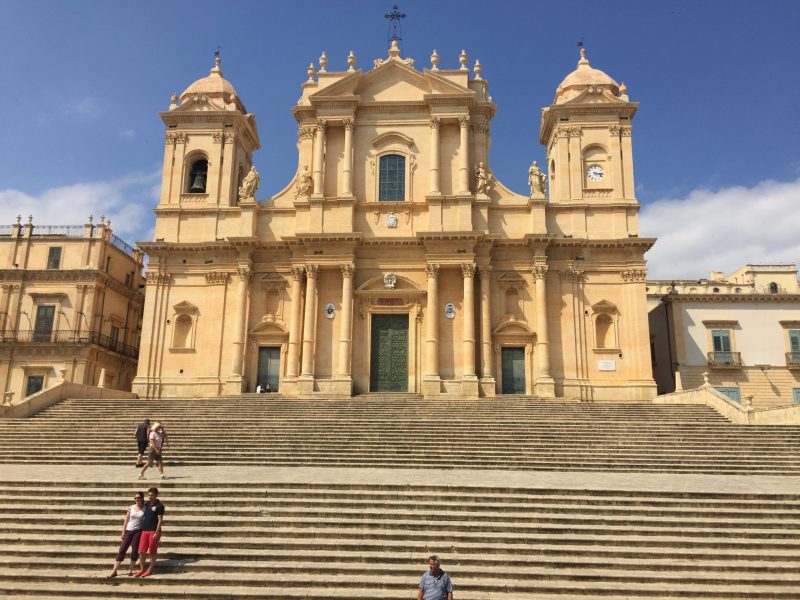 In an unspoiled and sun-drenched corner of southern Sicily is the Baroque town of Noto. Noto, known locally as Il Giardino di Pietra (Garden of Stone), is the most beautiful of Baroque towns. The local limestone of the buildings takes on a soft, peachy golden glow and the effect, especially at sunset, is spectacular! After spending a few weeks traversing the entire island of Sicily, it is here in this less touristy town, that my husband, Jack, and I called home for the last ten days of our trip.

We stayed in the heart of Val di Noto in an ancient Masseria (farm). The farm, with its small farming community, was once an estate. It was a world in which farmers worked, slept, celebrated their harvests with festivals, fell in love and raised their children. Until the ’60s, the farm was inhabited and productive. The main production were olive oil and wine, together with almonds, citrus fruits and the breeding of cows that produced milk and cheese.

The brothers Carlo and Gianfranco took the memories of their childhood, the scents and flavors they have never forgotten and turned the land (not yet touched by economic development), into a dream come true.

The family restoration project converted the old Sicilian masseria into a modern hotel with 36 rooms, a swimming pool, a restaurant and many different beautiful areas to relax and take in the breathtaking beauty of it all. There are deep roots in the cultural identity of the place, it is alive with history and you can literally taste its traditions linked to country life. It has awakened my taste-buds and my soul. 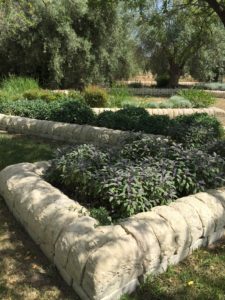 Set at the entrance of the rejuvenated estate, the herb garden welcomes its guests with its intense aromas and colors.
Mixing elements of the rural landscape and of the local culture, this garden is a maze of dry walls where many different species of wild herbs perfume the air and are the perfect match to the typical Sicilian cuisine. Every dish in the restaurant is seasoned with the herbs, collected daily by the chefs.

The 20 hectares (nearly 50 acres) estate stretches until the border of the Vendicari Reserve, and is enclosed by 300 olive trees. 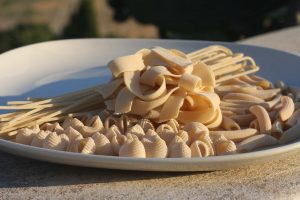 Dishes are prepared with pasta made with Sicilian antique grains and organic extra virgin olive oil of the olive trees on the property. Daily, the chefs pick vegetables in the organic vegetable garden and use those products to create delicious dishes. 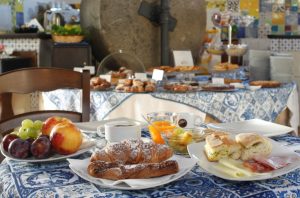 Breakfast (colazione) was served in the Old Palmento (olive mill).

We enjoyed  home-made jams and orange juices from the citrus groves, as well as Sicilian granitas. 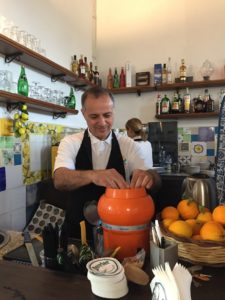 I miss Alessandro, who greeted me each morning with a warm smile and a robust “Buon Giorno, Caterina” as he handed me my glass of fresh blood-orange juice every morning!

Southeastern Sicily is endowed with many treasures, with its concentration of sleepy hilltop towns, accessible Greek ruins, unspoiled beaches and of course the food! From the province of  Ragusa (the garden of Sicily), where most of the islands vegetables and fruits are grown, to Modica, famed for its chocolate (still prepared in accordance with an ancient Aztec recipe, imported by the Spanish), a feast of flavors awaits you in Sicily and it is rare to eat anything that is not produced locally!

This part of Sicily sinks its own cultural roots in a strong rural identity. Wandering around the countryside, you can still see ancient stone buildings and manors, many of them completely abandoned, evidence of a rich agricultural past. 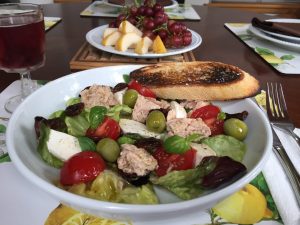 This simple salad with few ingredients, dressed only with olive oil and a splash of vinegar, shows off the island’s intensely flavored foods. The list of ingredients and how to put this salad together is below.

This is one of those meals that needs no recipe. Into individual bowls, place a layer of lettuce. Add fresh mozzarella. If you’re using Ciliegine, the tiniest mouthfuls (1/3 ounce) which are about the size of a cherry, leave them whole. If you have  Bocconcini, which are 1-inch in diameter, leave whole or cut in half. The goal here is to have the cheese and the tomatoes roughly the same size. Scatter sun-dried tomatoes over the salad. Add the olives and chunks of tuna. Give a generous drizzle of olive oil and a healthy splash of vinegar to the salad. Season with salt and pepper. Serve with bruschette … and enjoy the view wherever you are!

The View … The Food … spectacular! 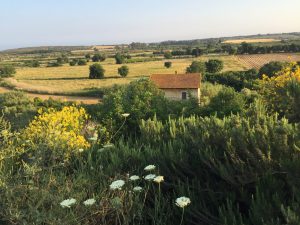 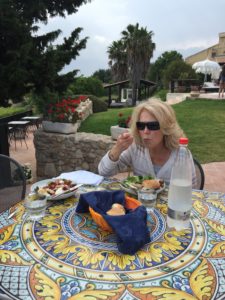 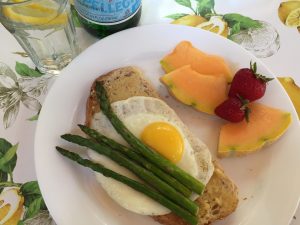 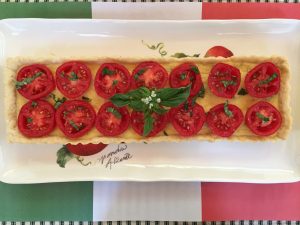