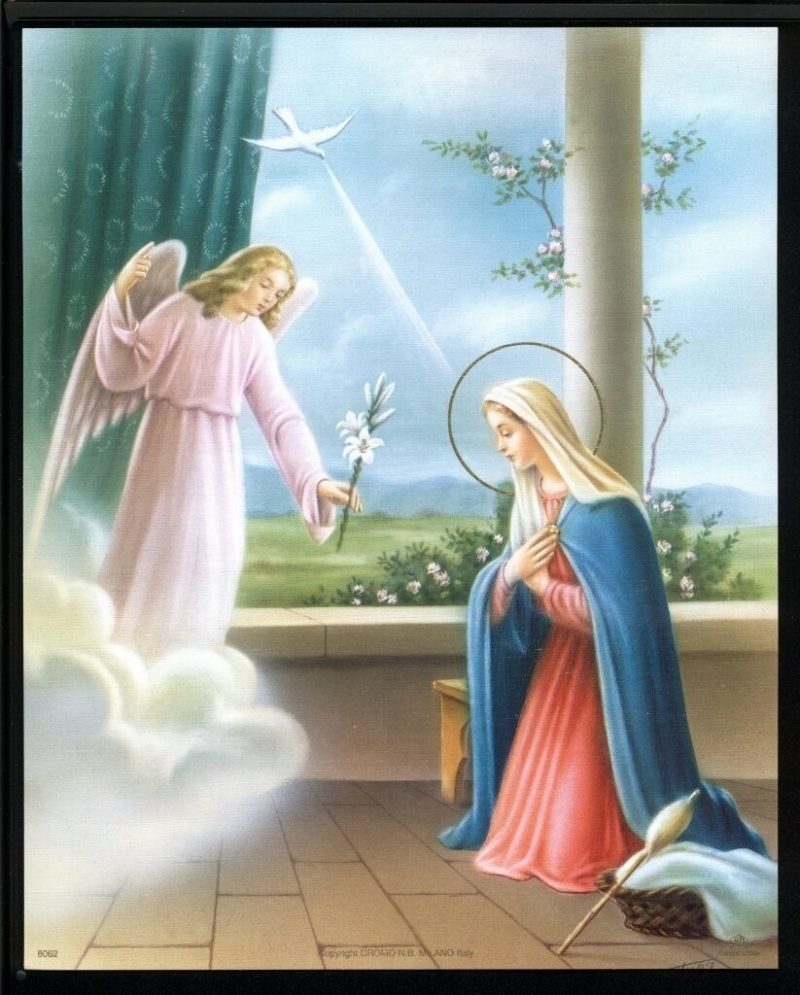 The Angelus is a centuries-old Catholic devotion that recalls the annunciation of Christ’s birth by the Angel Gabriel to the Virgin Mary. The history of the Angelus is a combination of what is certain and that which has been handed down in story. What is clear is that Franciscan houses and churches were praying the Angelus by 1263. We have the liturgical texts prepared by the Franciscan Sinigardi di Arezzo, that were in use in the 13th century. What is less certain, but carried in the tradition, is the origin of the prayer.

Francis of Assisi, an Italian friar, beloved saint, and one of the most venerated individuals in Christian history, founded the Franciscan Order for men.

The Angelus arose from St. Francis’ special attention to the Incarnation, his love of Mary, the Mother of God, and a desire to ensure prayer entered the daily lives of all people.

A review of Church history shows that this devotion did not appear suddenly, but developed over several centuries. Most Church historians agree that the Angelus can be traced back to 11th-century Italy, where monks said three Hail Marys during night prayers, at the last bell of the day. As early as the mid-13th century, the Franciscans in Assisi followed night prayer (compline) with a Hail Mary and the ringing of bells.

By the 17th century, a set pattern had developed for this prayer. When the church bells were rung at 6 a.m., noon, and 6 p.m., short verses from Scripture were recited, each having to do with the Incarnation, each followed by a Hail Mary, and then a closing prayer.

The history of the Angelus is by no means easy to trace with confidence, and it is well to distinguish in this matter between what is certain and what is in some measure conjectural. In the first place it is certain that the Angelus at midday and in the morning were of later introduction than the evening Angelus. Secondly it is certain that the midday Angelus, which is the most recent of the three, was not a mere development or imitation of the morning and evening devotion. Thirdly, there can be no doubt that the practice of saying three Hail Marys in the evening somewhere about sunset had become general throughout Europe in the first half of the fourteenth century and that it was recommended and indulgenced by Pope John XXII in 1318 and 1327.

The theme throughout this prayer’s history and usage is the number three. There are three antiphons, three Hail Marys, and the prayer has been traditionally said three times a day – in the morning, at noon, and in the evening.

Today, the Angelus (Latin for “angel”) is practiced by reciting as versicle and response three Biblical verses describing the mystery (from the Gospel according to Luke); alternating with the “Hail Mary!” It is typically prayed at 6:00 a.m., noon, and 6:00 p.m. each day.

When the Angelus is prayed by more than one person, a leader says the first part, with everyone else reciting the responses.

During the Easter Season, from Holy Saturday until Pentecost, the Regina Coeli, replaces the Angelus.

V. The Angel of the Lord declared unto Mary.

R. And she conceived of the Holy Spirit.

Hail Mary, full of grace, The Lord is with Thee.

Blessed art thou among women,

And blessed is the fruit of thy womb, Jesus.

Pray for us sinners,

Now and at the hour of our death. Amen.

V. Behold the handmaid of the Lord.

R. Be it done to me according to thy word.

V. And the word was made flesh.

R. And dwelt among us.

V. Pray for us, O Holy Mother of God.

R. That we may be worthy of the promises of Christ.

Let us pray: Pour forth, we beseech Thee, O Lord, Thy grace, into our hearts, that we to whom the Incarnation of Christ, Thy Son, was made known by the message of an angel, may by His Passion and Cross be brought to the glory of His Resurrection. Through the same Christ Our Lord. 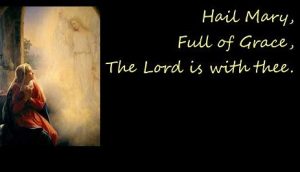 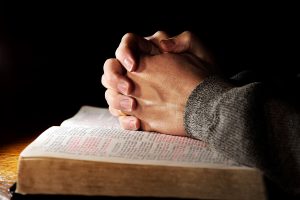