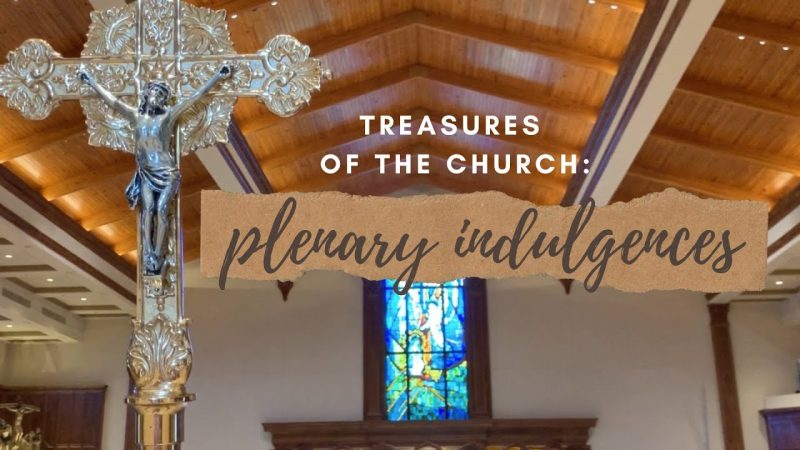 Simply put, an indulgence is a way to reduce the amount of punishment one has to undergo for sins! Now that I have your attention …

Indulgence is the English form of the Latin word indulgentia. The Latin word means an act of kindness, forbearance. In “Church Latin,” it primarily means putting aside a just punishment caused by sinful acts. Indulgences, when prop­erly understood, simply reflect the mercy of God, who constantly bestows indulgences on human beings.

To properly understand this ancient practice of offering indulgences for ourselves or for the Holy Souls in Purgatory, through prayer and penance and what is needed to receive them, we must grasp the relationship between forgiveness and punishment. God, of course, graciously forgives all sins, even the worst. We experience this divine mercy preeminently in the sacrament of Penance, which firmly assures us that our sins are truly gone.

However, forgiveness does not necessarily free us from punish­ment. Some, of course, will quickly object: Where’s the mercy? Why does God want to punish sin? Isn’t this a contradiction?

From the merely human standpoint, we think of punishment as “settling scores.” We punish wrongdoers by restricting their freedom, requiring some unpleasant work, or even causing pain or death. Such punishments are motivated primarily by the desire to restore justice — or to avenge misdeeds and deter other crimes.

By contrast, God’s punishments always emerge from his merci­ful love. As such, God’s penalties act as “medicine” to heal the self-inflicted wounds caused by personal sins, specifically the de­struction of our friendship with God.

During a general audience in 1999, Pope St. John Paul II explained that sins are forgiven through the sacrament of penance, but then there is a kind of punishment still due the sinner. “God’s fatherly love does not exclude chastisement, even though this always should be understood in the context of a merciful justice which reestablishes the order violated,” he said.

The pope went on to say that “the “temporal” punishment that remains after forgiveness is a grace aimed at wiping away the “residues of sin,” offering the reformed sinner the chance of complete healing through “a journey of purification” that can take place in this life or in Purgatory.

By God’s grace, participation in a prayer or action that has an indulgence attached to it brings about the necessary restoration and reparation without the suffering that would normally accompany it. It frees a person from the punishment their sinfulness warrants as it is a remission of the temporal punishment a person is due for sins that have been forgiven.

The granting of an indulgence by the church is “the expression of the church’s full confidence of being heard by the Father when, in view of Christ’s merits and, by his gift, those of Our Lady and the saints, she asks him to mitigate or cancel the painful aspect of punishment by fostering its medicinal aspect through other channels of grace,” the late pope said.

“An indulgence, then, ” he continued, “is the result of the abundance of God’s mercy, which he offers to humanity through Jesus Christ and through the church. But this gift cannot be received automatically or simply by fulfilling a few exterior requirements nor can it be approached with a superficial attitude. The reception of an indulgence depends on our turning away from sin and our conversion to God.”

He concluded by saying, “You must remember that an indulgence is not a quick ticket to heaven, rather, it is an aid for the real conversion that leads to eternal happiness.”

While these mysterious healing acts originate in God, they also involve Mary and all the saints. God draws them into his “healing project” through their union with the Body of Christ, which includes all baptized people, living and dead. This organic unity allows the goodness of each saint to benefit others. To put it another way, the “holy excess” of some saints gets transferred to people whose sins have made them “deficient,” specifically by pulling them away from God and towards evil. God’s punishment somehow corrects the sinner’s disastrous turn­ing away from God.

Let me give you an example. I have a close friend whose daughter was a good student all through high school until her junior year. After getting her driver’s license, she was allowed to drive herself to school. One time (which turned into many times), her friends convinced her to go off campus for lunch and on many occasions, they were late for classes. She falls behind in the class she repeatedly missed and failed the class. Her dream of going to college is in sever jeopardy and the summer study abroad to Italy, well, she can kiss that good-bye, as she must attend summer school. Did her mother forgive her? Absolutely! Was there a punishment? You bet! And since she abused her driving privileges, she won’t be using the car.

At first glance, summer school appears to be a cruel punish­ment; but it’s really an act of mercy because it restores her hope of reaching the goal of graduating high school and getting into college. Divine punishment does the same thing: it heals and returns the sinner to heaven’s road. God’s healing, as mentioned earlier, involves the “transfer” of spiritual goods within the Body of Christ, the communion of saints. How so? Theologians have offered various explanations, but perhaps the well-known story of Saint Augustine (354–430) and Saint Monica works best.

In his youth, Saint Augustine lived wildly, fathered an illegiti­mate son, and fell in with some brilliant people who vehemently rejected Christian faith. By any measure, Saint Augustine suffered from a massive deficiency of holiness. Saint Monica, his mother, clearly had “excess holiness,” manifested by her infinite patience with her son, her constant prayer, and her resilient faith. Whereas Saint Augustine prayed little and behaved badly, Saint Monica’s fervent prayer and goodness tipped the scales toward her son and fostered his spiritual healing and eventual conversion. Saint Mon­ica, then, truly — and willingly — transferred her “spiritual goods” to her son. What happened to Saint Monica and Saint Augustine can happen to anyone. The same principle applies.

So, now that we have an understanding of the relationship between forgiveness and punishment, let’s dive into what indulgences are and why we should care.

As early as the third century, the Church allowed sinners to seek the intercessory prayers of people on the verge of being martyred. Sin­ners believed that their prayerful association with heroic martyrs could remove or at least reduce the just punishments for their sins. Christians highly valued these prayers because they came from men and women who had given their lives and had surely gone to Heaven! The “holy excess” of martyrs was indisputable and freely transferable.

By the twelfth century, indulgences had become more com­mon and increasingly regulated. Sad to say, these practices became widely misunderstood, distorted, and subject to abuse, especially by linking them with monetary exchange.

In 1967, Pope Blessed Paul VI strongly reaffirmed the Church’s ancient teaching about indulgences, which flows from the doctrine of the communion of saints. Moreover, the Holy Father greatly simplified the system, dividing indulgences into two types: plenary and partial.

Plenary comes from the Latin word plena, which means “full.” A plenary indulgence, then, frees a person from all punishment due to sin. In medical terms, it would be the equivalent to a total heal­ing of cancer, with the reversal of all the disease’s consequences. In spiritual terms, a person granted a plenary indulgence would immediately enter into God’s presence after dying, with all the wounds of sin healed. As an example, think of the Good Thief. Jesus said to him, “Truly, I say to you, today you will be with me in Paradise” (Luke 23:43).

A partial indulgence frees a person from some punishment due to sin. In the old system, which Paul VI modified, prayers and deeds were carefully calibrated according to difficulty, length, antiquity, and so forth. This excessive complexity, which emerged in the Middle Ages, sometimes promoted “spiritual accounting,” which was not really traditional. The reformed system has restored pure, sincere, and simple prayer to its proper place.

The church teaches that indulgences draw on the treasury of merit accumulated by Jesus’ superabundantly meritorious sacrifice on the cross and the virtues and penances of the saints. They are granted for specific good works and prayers in proportion to the devotion with which those good works are performed or prayers recited.

Even though confessed and forgiven sins will not send a person to hell, consequences remain to be paid on earth or in purgatory. An indulgence frees the recipient from those consequences. Reception of an indulgence always springs from sincere repentance, the desire to live a holy life, reception of the sacraments of Penance and Holy Communion as soon as possible and prayer for the Holy Father. An indulgence cannot be bought, nor can one be obtained by going through the motions without sincerity.

A partial indulgence covers part of the punishment due for sins; a plenary indulgence removes all of it. Both kinds of indulgence come from the merits of Jesus, the Blessed Mother and the saints. These “merits” are the opposite of “demerits.”  They are spiritual fruits accumulated through holy living. To grant indulgences, the Church draws on a great treasury of merits: the infinite value of Christ’s Passion, death and Resurrection, and the prayers and good works of the Blessed Virgin Mary and the saints – including all of those on earth who live holy lives.

Indulgences, when understood in an authentic and balanced manner, should inflame our hearts with an even greater love for the Divine Mercy, whose mysterious ways eagerly draw people into His eternal embrace. 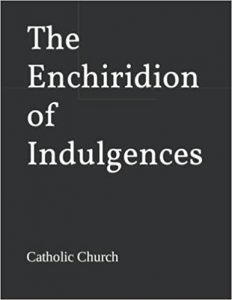