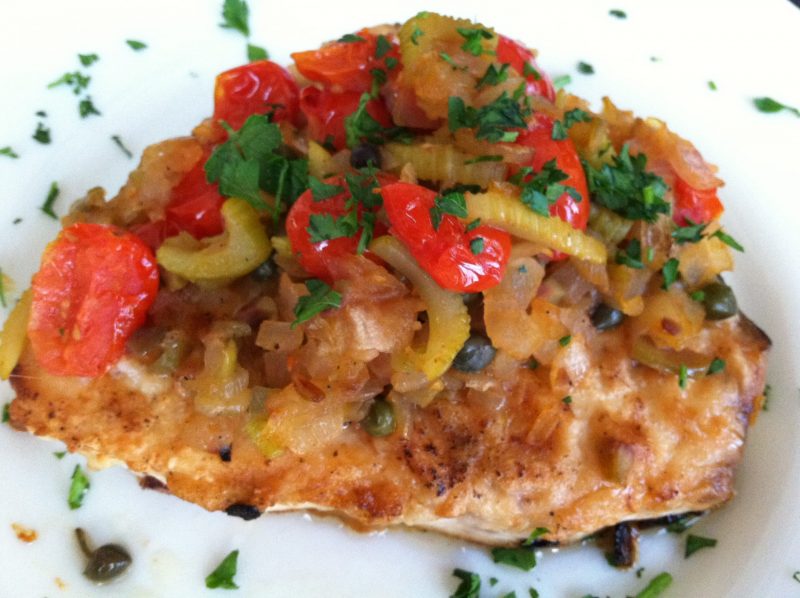 If for no other reason, (and I have many) I would live in Sicily for her abundant source of fish. The catch varies with the seasons and the waters. There is a Sicilian saying, “If you want to eat fresh fish, you mustn’t have a tight wallet”. Swordfish commands a high price due to its short season. The best is caught in the narrow Straits of Messina during the months of April, May and June. There are of course, many recipes but the sweet-sour variety, like this Stemperata are typical of Sicily’s heritage.
According to Archestratus, famed Sicilian-Greek gourmet of the 4th century, Sicilians used this vinegar type of sauce to cover up inferior fish. That of course, is not what we’re doing here. This sauce is full of flavor and turns swordfish or tuna into an outstanding delicious meal that even folks who don’t like fish will love.

In a large skillet, heat the olive oil and fry the onion until it softens.
Add the celery and olives, cook a few minutes.
Slice the tomatoes in halve lengthwise, add to pan. Simmer 6-7 minutes until the tomatoes are cooked.
Stir in the capers, sugar and red wine vinegar. Cook on high heat for a few minutes (to evaporate the vinegar) then transfer to a dish while you prepare the fish.
Salt and pepper the fish, dredge in flour and shake off excess. 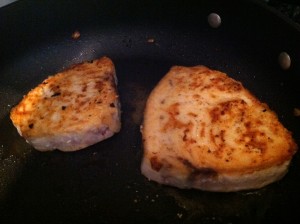 In the same skillet you cooked the vegetables in, heat a little bit of olive oil, cook swordfish on medium-high until brown (about 2 minutes). Turn over and brown the other side. 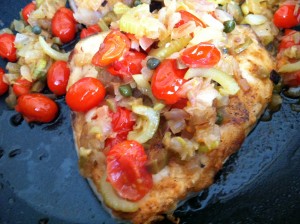 Place the steaks in an ovenproof dish, top with vegetable mixture. Bake in a 350* oven for 10-15 minutes. (depending on thickness of fish).
Sprinkle chopped parsley over each serving. 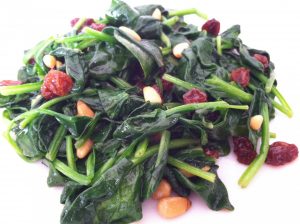 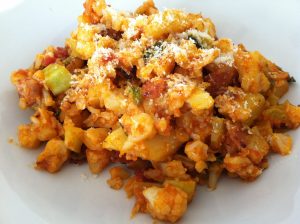