Herbes de Provence is a multi-purpose spice blend that is made with dried herbs that are commonly grown and used in France’s Provence region. As French cuisine gained popularity in the United States (thank you Julia Child) and abroad during the 1970’s, commercial herb blends bearing the name “Herbes de Provence” began to become available.

As the name Herbes de Provence is generic, and does not have Protected Geographical Status, there is no guarantee that any herb mixture on the market actually comes from Provence; indeed, the vast majority of these blends come from central and eastern Europe, North Africa and China.

There isn’t a standard blend, so the ingredients and their proportions vary from person to person and brand to brand. The most basic blends typically contain rosemary, savory, marjoram and thyme. Although, lavender seems to be everywhere in France, it was not traditionally included in the mixture.  In North America, lavender buds are a popular component for Herbes de Provence. 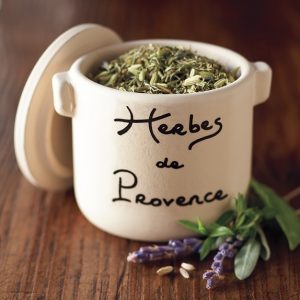 I first used these fragrant herbs (reminiscent of the French countryside), after I returned from a trip to France, where I purchased several small containers for myself and friends back home. When I ran out, I turned to Williams Sonoma for their aromatic blend of dried Provençal herbs. This traditional blend of thyme, basil, savory, fennel and lavender captures the flavors of sunny Provence and enlivens meat, sauces, poultry and vinaigrettes. The herbs come in a reusable covered crock made of Provençal clay and make a lovely gift, if you can’t get to France.

Herbs de Provence is not just for cooking the cuisine of France. With the region’s location on the Mediterranean Sea, the blend also works well with many foods included in Mediterranean cooking.

The Mediterranean is the deep, blue heart that gives life to the countries that surround her, and the various countries share more than a beach.

Much as the French may protest, many things, such as indigenous ingredients, unite southern French, Spanish and Italian cooking with each other and to the rest of the Mediterranean. Unlike the butter-based cuisine of northern France, southern France, like her neighbors, cooks with olive oil. Much of the Mediterranean shares several of the same herbs, such as thyme, savory, rosemary and oregano, used in Italian cooking.

After my recent visits to several lavender farms, and with plenty of dried culinary lavender on hand, I am inspired to make my own “Herbs de Provence” that I will use (and I hope you will too) in many recipes.

Using a spice grinder or clean coffee grinder, pulse the fennel seeds a few times. Transfer to a small bowl, then add the remaining herbs. Combine thoroughly, store tightly covered in a jar. 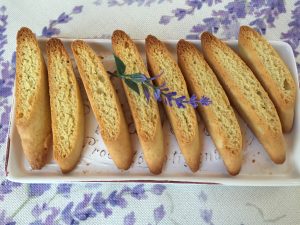 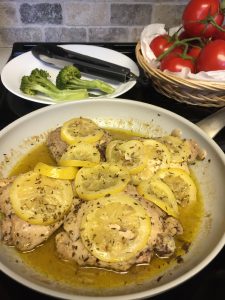